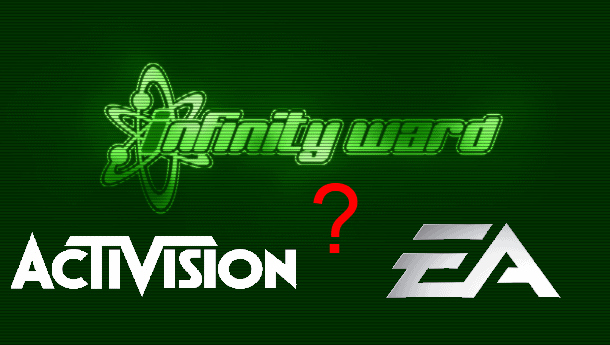 But why would they do that? They left EA, created one of Activision’s most popular franchises, and just released one of the biggest blockbuster titles to date. Doesn’t that make Activision and Infinity Ward the best of partners?

Apparently not. When Infinity Ward’s creators initially left EA, the current #2 gaming publisher in the world was in a similar position to Activision: at the top of their game, raking in the big bucks, and selling some of the hottest games around. But they were also controlling, and ended up making Zampella and West decide to leave, presumably because they are artists and creators, not marketers and moneymakers.

With that mindset in hand, they went to Activision and created Call of Duty, which became a smash hit and single-handedly killed the Medal of Honor franchise. Not only did it make bring Infinity Ward into the limelight, it helped propel Activision to the status they currently have now: videogame publisher supergiant. Ironically, Infinity Ward’s success has been their curse. Each new game they bring pulls in so much money and demand that the publishers step in to make sure no mistakes are made.

So who’s at fault? Activision can’t be blamed; as a publisher, it’s their job to do whatever it takes to ensure the games they publish make the most money. Infinity Ward, on the other hand, put themselves in harms way, for the second time. It’s no coincidence that the two largest game publishers have taken advantage of the popular developer to make money, and the pattern is repeating now.

If Infinity Ward is indeed looking to EA for future projects, it makes sense. EA has for the last three years been very generous to their developers, and has also helped create quite a few new IPs. Activision, however, won’t just let the developer go, and has a vice-grip stronger than any competitor today. Our only message to Zampella and West: make sure Activision doesn’t find anything compromising. We don’t want to see you go just yet.