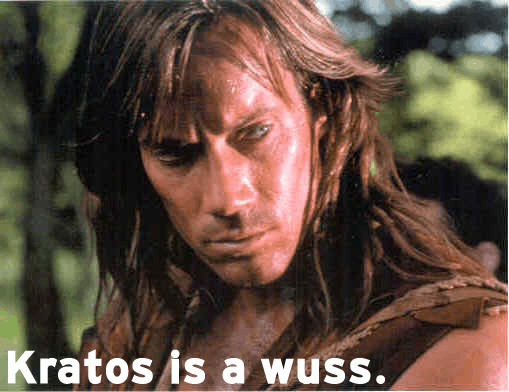 God of War 3 is an excellent game. I think it’s, in many ways, the best exclusive PS3 title thus far. But it ain’t perfect, and we’re all about finding the best, and worst, in games. As critics, it’s our job to point out the extremes on both sides, so here, we discuss the darker side of God of War 3.

Clearly, spoilers follow. Stop reading unless you want to complain about spoilers.

Kratos is after the blood of Olympus. His time for vengeance is nigh. It’s only a matter of time before he gets to rip the life out of the gods for betraying him. He’s angrier than ever, and yet he quickly begins to trust Pandora and tries to save her life when her death is the only way, he believes, to kill Zeus. Which, of course, makes no sense since by that time he’d killed every god besides Zeus, so why the hell did he think he needed to open the box again? Then, as I discussed with Stig Asmussen, it was hope that saved Kratos, hope that was the fire in his eyes at the game’s end, and hope that could combat the evils of the world. Seriously, what the hell? Yes, it fits with the Greek lore, but this is Kratos, the god of frickin’ war we’re talking about. He rips peoples head’s off, cuts them in half, and beats them to a pulp…but the only way he can kill Zeus is hope? From the Greeks, I’d buy it. From Kratos, not so much.

After killing Poseidon and getting thrown down to the underworld by Zeus with no help from Gaia, Kratos rightfully takes his revenge on the Titan by cutting off her arm and letting her fall to her supposed death. This happens far away, and Kratos makes his way back to Olympus to find Helios fighting a lava-red Titan, only to save the weakling by ripping Helios’ head clean off. But then the Titan lashes out against Kratos. What the hell?! He couldn’t have known that Kratos killed Gaia, and Kratos just saved the bumbling idiot from a fairy on a chariot. Why the hell did he attack? It just doesn’t make any sense.

Kratos’ story is one of menacing pain, which we relive in each and every God of War game. And for good reason: it’s Kratos’ driving force, his reason for living, and his reason for killing everything and everyone in his path. So flashbacks are understandable, even if they’re considered the weakest form of cinematography. But why does it have to be artsy fartsy? I felt like I was watching an endless Quantum of Solace introduction, which really is good only once. It’s bad enough we can’t skip it, even after beating the game.

The God of War titles have never been all inclusive about platforming, but every game had its fair share of hopping about and puzzle solving. In God of War 3, it’s almost as if the universe saw fit to make puzzles easy and dull so Kratos wouldn’t waste any time pillaging and disemboweling his enemies. If there were no puzzles, I couldn’t complain, but there are and they stink. Imagine playing Braid 2 and solving each puzzle without even trying, or beating Portal 2 in an hour because, oh hey, thinking isn’t required. That’s an apt description of God of War 3’s puzzles.

5. “Defeat this difficulty to be able to use this item.”

As wonderful God of War 3 is, replayability is not one of its strong suits. The epic can be enjoyed again and again, but Santa Monica Studios acknowledged that players would get bored simply repeating the same battles over and over, and included collectable items to shake up gameplay. The problem is these items only become available when you beat the game…on each difficulty setting you want to play. So if you beat it on normal (Spartan), any future playthrough on the normal difficulty will have treasures available. But if you want to set the difficulty to hard (Titan), then those treasures can’t be used until you beat the game yet again! Really, why the hell is that? It only makes players want to play less knowing they’ll have to put a whole extra playthrough just to do what they wanted.