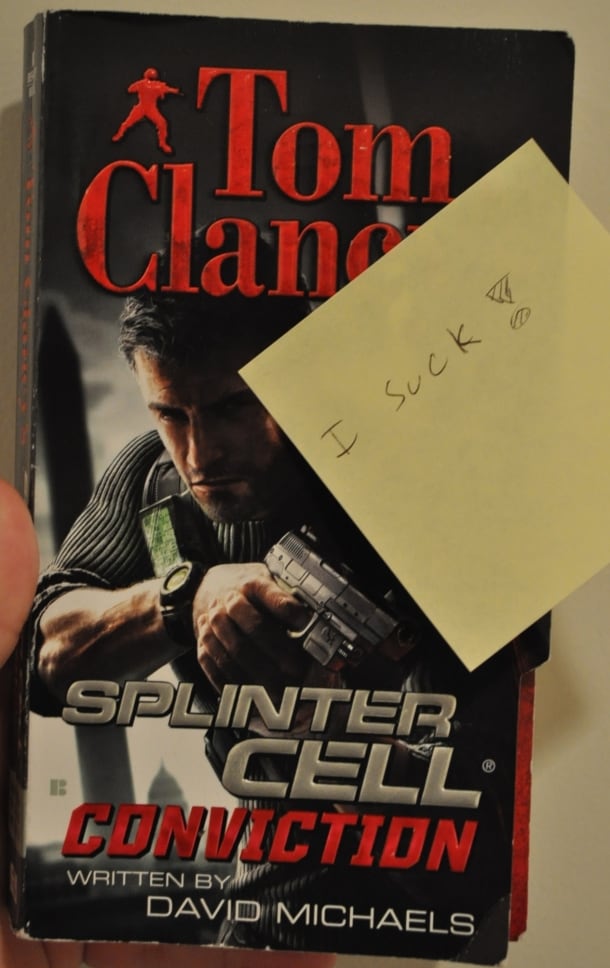 If there’s one thing that should be done well, it’s books based on videogames. Gamers place ridiculous standards on their favorite properties, so there’s really no excuse for publishers to do a half-assed job when making any additional product for the franchise. It doesn’t matter if it’s another game, action figures, posters, or even books. Though the latter is a rarity, Splinter Cell is one of the few franchises that has continued to put out fairly decent literature, even by a gamer’s standards.

Their latest isn’t worth the paper it’s written on.

Poorly named identically to the upcoming game featuring our favorite super-spy Sam Fisher, Splinter Cell: Conviction is straight up, non-stop action. If Fisher isn’t pondering his next move or traveling between various parts of Europe to accomplish some unknown greater mission, he’s beating up bad guys or running away from good guys. While charming for the first 50 pages, it gets old very quickly. The whole first half of the book leaves readers unsure of whether Fisher has gone rogue, freelance, or just enjoys torturing second-class mobsters.

Author David Michaels (a pen name) succinctly describes in this book what a reasonable Splinter Cell game could have: lot’s of stealth and combat with witty one-liners from an aging ex-secret agent. The plot is as good as games from 5 years ago, mostly making sense in the mind of a 12 year old. There are high-tech gadgets and several well-placed marketable properties (iPhone, Google Maps, and Garmin to name a few) at his disposal, not to mention a number of firearms. Yet all these things manage to do is create action sequences, passing by any possible story, character development, emotions…hell, everything except for gunslinging and high-speed pursuits.

What the author failed to realize is that books that just detail action sequences fail to make readers want to turn the page. I sure as hell didn’t when I realized all I would get for reading yet another narrow escape was  an escape or fight scene, then repeat the process with different (and sometimes even the same) characters. Fisher’s biggest point of growth is when he realizes he’s getting old. He’s only likeable because he’s a killing machine with a minor in sarcasm. The rest of the characters are throwaways. Interchange their names and you won’t notice the difference.

The fact that Ubisoft and whomever David Michaels is had the audacity to put Tom Clancy’s name on the title, whether you like the prolific writer or not, is a disgrace.

To truly appreciate how bad this book is, consider this: should the game follow an identical plot, no one will care about the campaign. The levels may be fun to play, but otherwise it would prove to be a two dimensional story with characters less intelligent than retarded zombies. This book isn’t worth the paper it’s printed on, because the words ruin it. If there were some method of removing the pages from the spine and softening them, I might consider using it as toilet paper. Reading this was an utter waste of time, and I can only hope that you take my advice: Do. Not. Buy.