In 2007, Interplay sold Bethesda Softworks the rights to Fallout. A while back, Bethesda Softworks filed a lawsuit against Interplay for trademark infringement, specifically the use of the Fallout IP. The suit was to stop development on Interplay’s Fallout MMO and to disallow the company from selling its older Fallout titles. It appears that Bethesda’s injunction has been denied by a Maryland district court.

“Plantiff’s motion for a preliminary injunction… IS, DENIED for the reasons stated in court,” the court order states.

This order allows Interplay to sell their Fallout games and continue work on the MMO, codenamed Project: V13. While it doesn’t end the dispute between the two companies, it is a significant victory for Interplay. However, it will be futile if Bethesda is able to dissociate the Fallout IP from Interplay in court, which is a likely possibility.

Take a look at the full court order below: 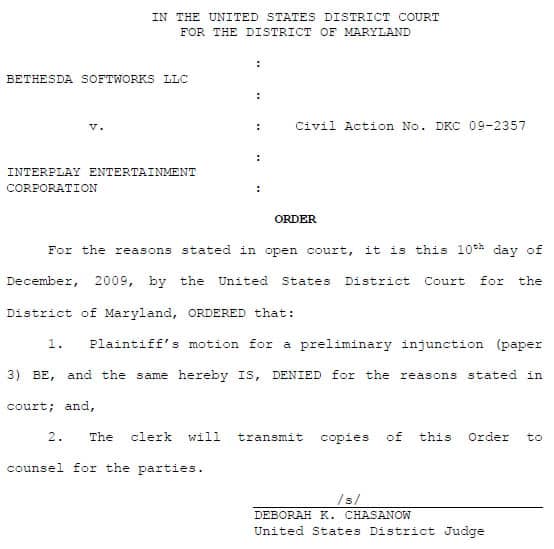