There are some pretty messed up games out there, so I decided to put together a list of the top 10 games of all time that make you go “WTF?!” Some of them are great games, others…not so great. Regardless, they are all going to make you wonder what the developers were thinking (read: smoking?) when they were making these games. Let’s take a look!

JSRF launched on the original Xbox back in 2002. It was a well-received game and, in fact, one of my favorites on the big black box. That being said, it was pretty strange. The player controls a character from a gang of Japanese in-line skaters, and the goal is to cover up rival gang graffiti. Simple enough on paper, but the game’s wacky animations and cell-shaded graphics, bizarre soundtrack and eccentric characters get it onto our list of biggest WTF games of all time.

9. Space Giraffe (aka Tempest on Acid)

I have a lot of respect for Jeff Minter, after all, he did create the Xbox 360’s original media visualizer, but his XBLA game Space Giraffe is one of those games that makes you go “WTF is this?” The game had very polar reviews, some bashed it (it won Official Xbox Magazine’s Worst Game of the Year award for 2007) and some praised it. Whether you think the game is good or not, there’s no denying that it’s the closest thing to an acid trip you’ll ever get without acid.

I’m all for appealing to the casual gamer market, but come on! Does this really warrant a game? And to add insult to injury, it’s one of the rare games that is forward-compatible on the Xbox 360. We know what Bill Gates is playing…

A fighting game based on the pro basketball player Shaquille O’Neal? Who thought this was a good idea, and how could Electronic Arts actually publish this? In the game, you play as – wait for it – Shaq, who wanders into a kung fu dojo while heading to a charity basketball game in Tokyo. There, he stumbles into another dimension, where he is forced to rescue a young boy named Nezu from the evil mummy Sett-Ra. I just hope he can throw a punch better than he can throw a free throw.

6. Big Rigs: Over the Road Racing

A drug dealer has kidnapped some children and takes them to the Moon, where he plans to use a laser cannon to destroy Earth. This already qualifies it for our list, but wait, there’s more! As Michael Jackson, you have to defeat the drug dealer (whose name is Mr. Big) and his cronies by using dance moves that shoot magic rays. Done deal.

Released for the NES in 1989, Monster Party is one weird game. The story starts off normal enough: on his way home from a ball game, a boy named Mark is approached by a winged gargoyle alien monster appropriately-named Bert. Then it just gets weird. The monster fuses with Mark and they go to the Dark World where they beat on monsters with a baseball bat. What kind of party is this? 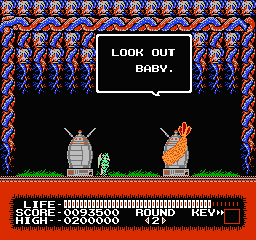 Seriously, who comes up with this stuff? The game’s box just about does it for me. Still, I have to hand it to them, it’s pretty original. NASA launches Deep Probe Nine into space. In hopes of making contact with extraterrestrial life forms, they crammed the shuttle with cultural mementos, photos, and human’s most precious resource, disco. Years later, Deep Probe Nine is picked up by an alien species who take an unearthly liking to the disco records and they invade Earth in search of disco.

This game is just absurd. The player controls the character of General George Custer, depicted as a man wearing nothing but a cavalry hat, boots, and a bandana, and sporting a visible erection. Custer has to overcome arrow attacks to reach the other side of the screen. His goal is to have intercourse with a naked, large-breasted Native American woman. I kid you not. This game is real, and it received tons of criticism. It’s also been banned from nearly all stores, easily putting it on the list of biggest WTF games.

Who knew rolling a giant adhesive ball around could be so fun? The story in Katamari Damacy deals with the aftereffects of the planet-sized King of All Cosmos’ binge drinking spree that wiped out all the stars and other celestial bodies from the sky. The King charges the Prince to go to Earth with a katamari – a magical ball that allows anything smaller than it to stick to it and make it grow – and collect enough material for him to recreate the stars and constellations. The game has a brilliantly original soundtrack and features a funny-looking man in tights. Well played Namco, well played.